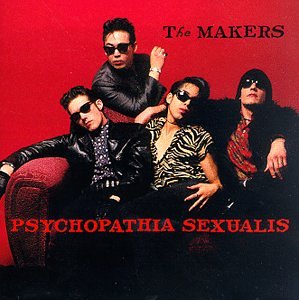 With Hunger, the Makers began to move away from their garage punk roots toward a fuller, more sinister, and in some ways buoyant sound. With new looks and a potent new glam approach, Psychopathia Sexualis is the first of their "mature" efforts, and although it retains much of the crude aggression of Hunger, the songs are stronger and more spacious, and the playing more powerful, thanks to guitarist Jamie Frost, who rocks hard and nasty while simultaneously giving the band a much-needed versatility. Michael Shelley sounds more convincing than ever, whether singing a flaming rocker such as "Turn Up the Century" or the sensitive "Love That Is Strange," which features some nice guitar work by Frost. "Psychotropic Supergirl" and "Lover Lover" reveal the group's developing melodic sense, a skill they would master on Rock Star God. ~ Jim Smith, All Music Guide

"h3"Amazon.com "p"After first paying homage to their '60s garage punk heroes on their initial barrage of releases, including the LPs Howl and All-Night Riot, the Makers went on to define the contemporary garage genre with their 1997 fourth album, Hunger--a scorching fireball of wailing guitars, rumbling rhythms, snot-nosed attitude and anxious defiance. Now, just one year later, the Makers have made yet another pivotal leap in their artistic evolution: On their new album, Psychopathia Sexualis, they have virtually abandoned garage, widening their scope toward sophistication, heightened sensuality, and diversity. It's a mature, tasteful album where the Makers explore a wealth of mixed emotions (other than hate, angst, and rage) via paths of soul, art rock, and glam. Accordingly, the pace of "i"Psychopathia is varied--sometimes it's frantic, sometimes it's relaxed, depending on the band's incessant mood swings. Perhaps the most striking feature of the album is singer Michael Maker's voice: He actually sings--sweetly at times--instead of snarling and shouting. More than any other Makers release--and there have been two dozen--Psychopathia Sexualis stands firmly on its own, transcending any and all rock genres. --Joe Ehrbar